by US Census Bureau Staff

Editor's Note: People who knew little or nothing about Ukraine and its people may still not know much about them nearly six months into the war spawned by the Russian invasion back in late February. You may see the Ukrainain flag or display using its blue and yellow colors, and news reports still occur on a daily basis as Russia solifiies its hold on eastern Ukraine. But, what do you know about Ukrainians living in the U.S., many of whom came here in the 1990s falling the collapse of the Soviet Union. To learn more, read the following report by the U.S. Census Bureasu, compiled by Virginia Jenkins, Angela Buchanan, Shabnam Shenasi Asari and Joyce Hahn.

When the U.S. Census Bureau began collecting information on ancestry in 1980, there were an estimated 730,056 people who claimed Ukrainian origins.

That number did not substantially change until after the dissolution of the Soviet Union in 1991. By 2020, the Ukrainian population in the United States had topped one million.

The Census Bureau’s American Community Survey (ACS) data (1-year and 5-year estimates), along with decennial census data from 1980, 1990, and 2000, give us current and historical perspectives on the U.S. population with Ukrainian ancestry and on the foreign-born population from Ukraine.

Together, these data paint a demographic and socioeconomic portrait of these populations, from where they live and how old they are to what jobs they hold and how much they make.

The U.S. population with Ukrainian ancestry did not grow substantially in the 1980s but grew at a faster rate during the 1990s after the breakup of the Soviet republics.

Data about the population with Ukrainian ancestry are gathered from the ancestry question on the ACS. “Ancestry” refers to a person’s self-identification of their ancestry or ethnic origin and can include descent, roots, heritage, or place of birth of the person or their ancestors.

People who identify with a specific ancestry could have been born abroad or in the United States. That is why the number of people identifying with a certain ancestry is usually larger than the number who were born in that country.

Data on the foreign-born from Ukraine are derived from the citizenship question and the place of birth question on the ACS.

The term “foreign-born” does not include those who had at least one U.S. citizen parent when they were born, since those individuals acquired U.S. citizenship at birth.

The U.S. population with Ukrainian ancestry did not grow substantially in the 1980s but grew at a faster rate during the 1990s after the breakup of the Soviet republics. According to the most recent estimates (2016-2020 ACS), the total Ukrainian population was 1,015,209. 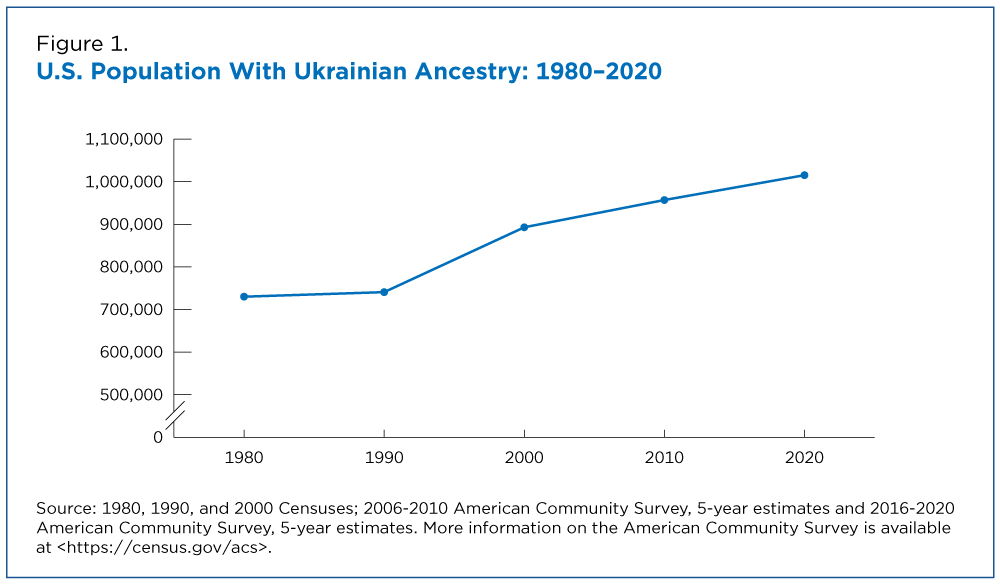 According to the 2019 ACS 1-year estimates, New York has the highest number of people who reported Ukrainian ancestry (140,637), followed by California (114,146) and Pennsylvania (97,421). There were also 50,000 or more people with Ukrainian ancestry in New Jersey, Florida, Washington and Illinois (Figure 2). 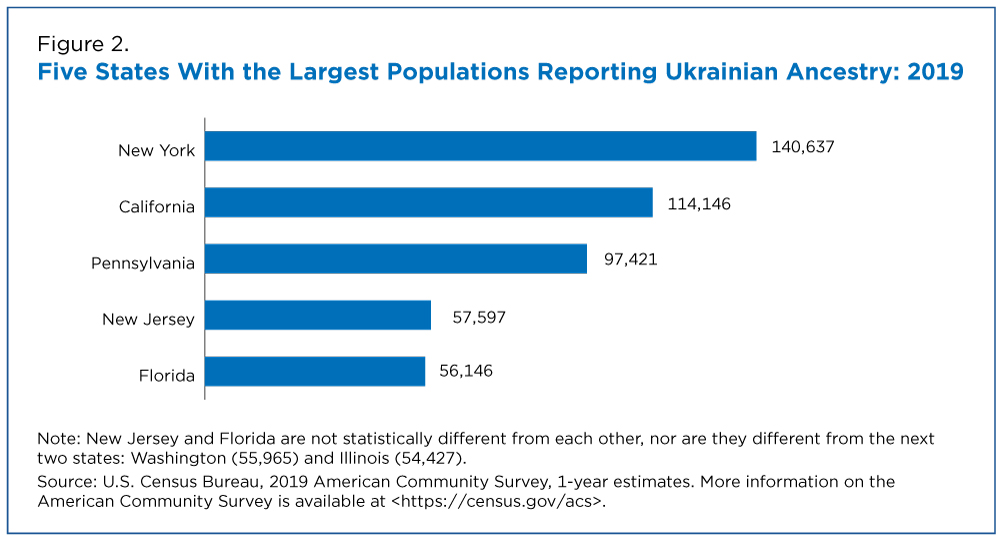 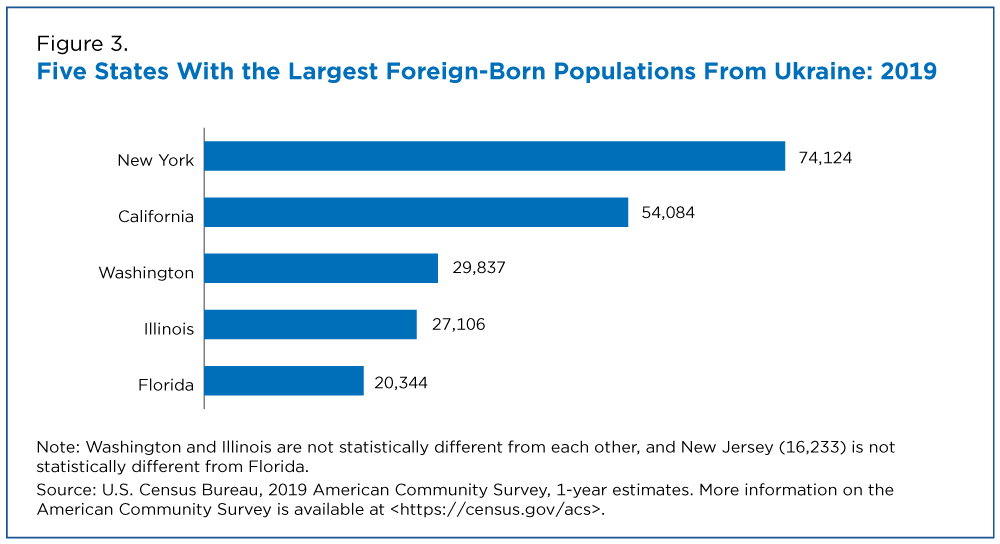 With a median age of 45.9 years, the foreign-born population from Ukraine is older than the population with Ukrainian ancestry (43.7 years) and the total U.S. population (38.5 years) (Figure 4). 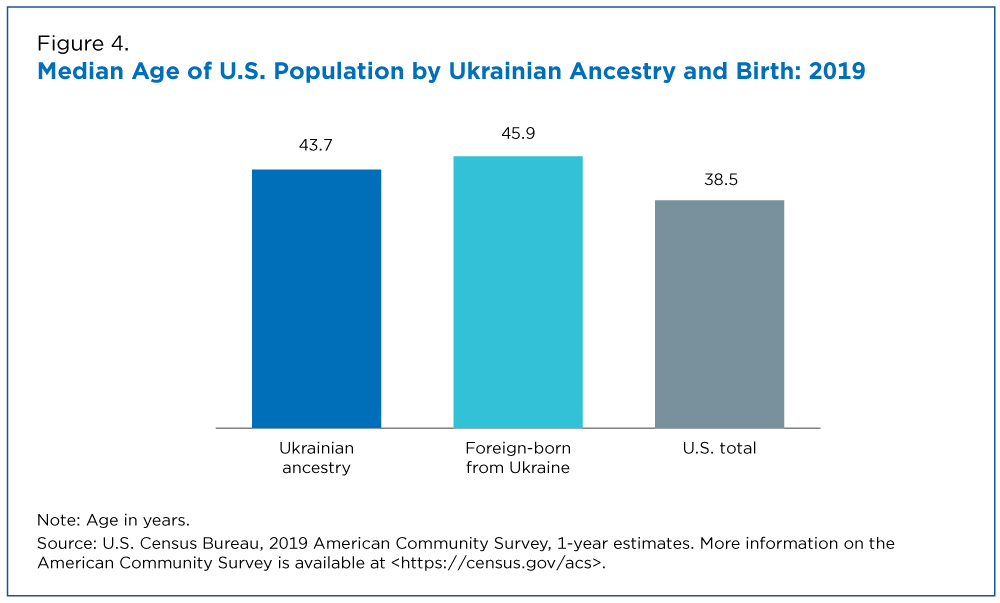 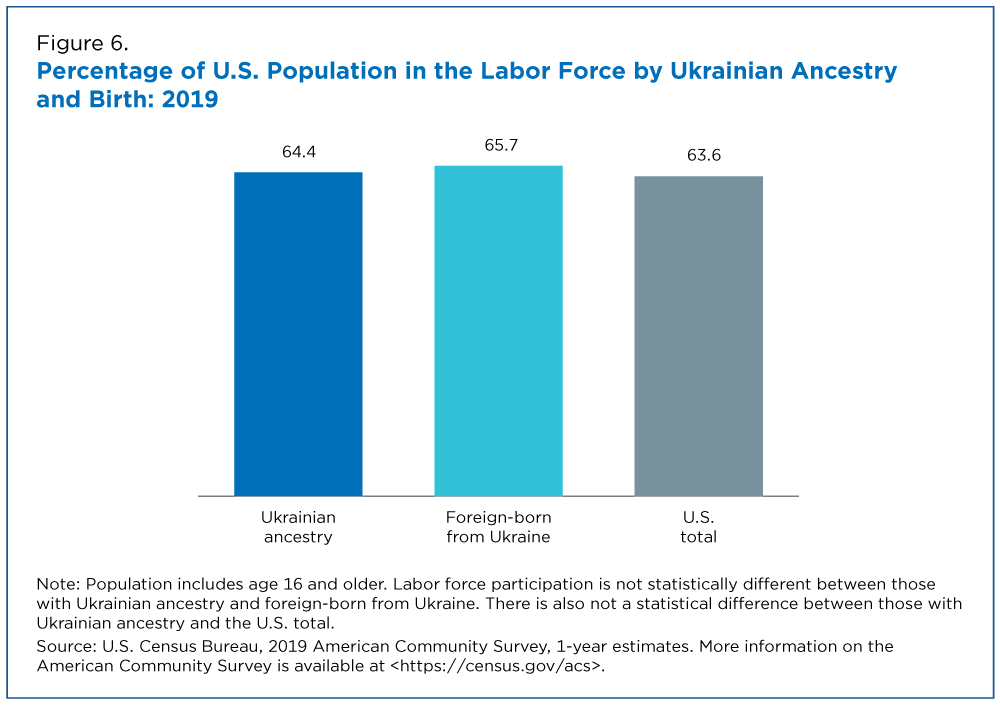 Notably, among those ages 16 and older in the labor force, people with Ukrainian ancestry (52.7%) and foreign-born from Ukraine (48.0%) are more likely to be a part of management, business, science, and arts occupations compared to 39.9% of the U.S. population (Figure 7). 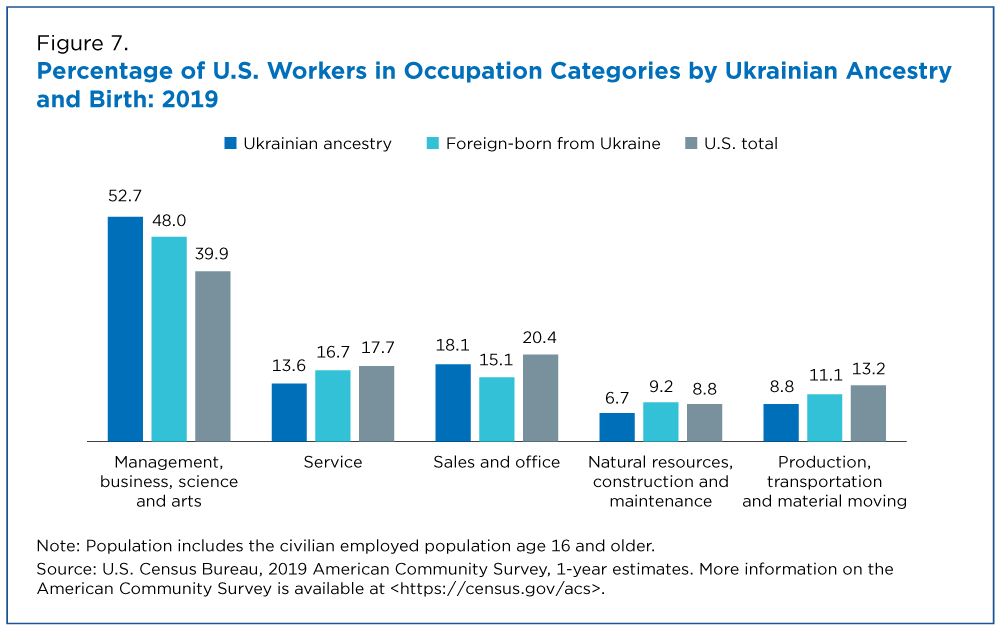 With a median household income of $81,603, those who reported Ukrainian ancestry outpace both the foreign-born from Ukraine and the total U.S. population (Figure 8). 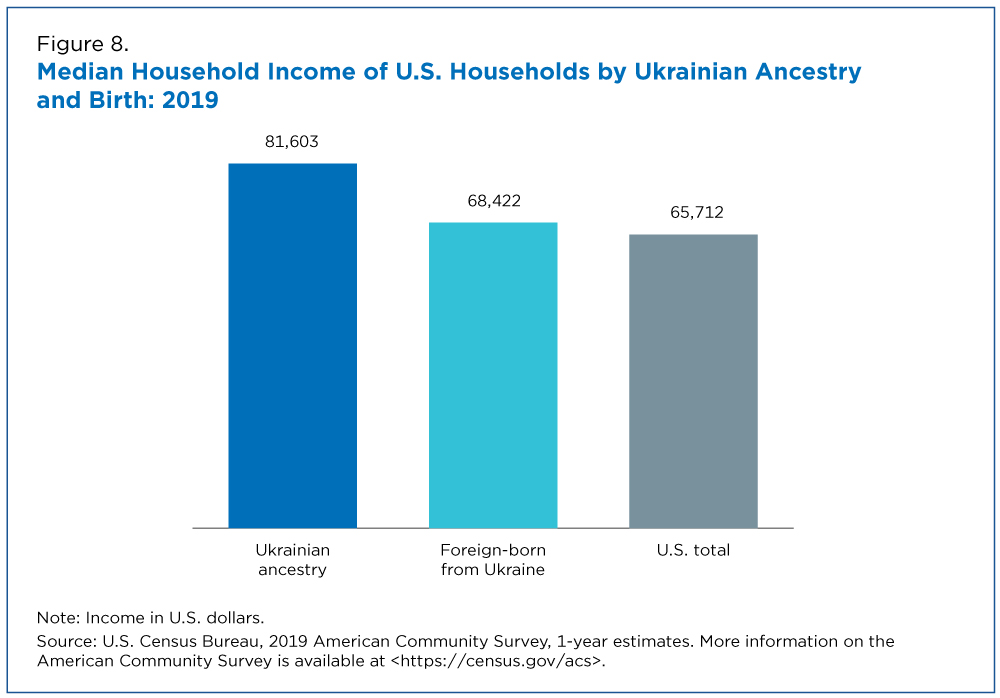 Search all articles by US Census Bureau Staff

Thirty was so strange for me. I've really had to come to terms with the fact that I am now a walking and talking adult.