Were You Part of History?

Despite unique challenges to voter registration and voting created by COVID-19 and heightened concerns about turnout as a result, the 2020 election had the highest voter turnout of the 21st century…

Editor's Note: The 2020 General Election was historic on a number of counts, some of which were related to responses to the COVID-19 pandemic (registration processes, mail-in and early voting). I have often used analysis from news and public opinion polling companies, but I found this report, written by Jacob Fabina of the U.S. Census Bureau interesting because the Census Bureau has access to a wide range of data sources. None, of course, reveal how you as an individual voted—only you can choose to reveal that to a pollster (and it is up to you to be honest or deceptive)—but much can be determined by comparing election totals with known demographic characteristics in speciifc areas, from state to county, city and even down to the precinct level. As you read this analysis, think of the impressions you had of the 2020 election, where you got those impressions (traditional media, social media, personal contacts) and how those impressions compare to this analysis.

The 2020 election featured the largest increase in voters between two presidential elections on record with 17 million more people voting than in 2016.

The COVID-19 pandemic did not prevent Americans from registering and voting at relatively high rates.

Only citizens — U.S.-born or naturalized — age 18 or older are eligible to vote.

In addition, 73% of all voting-age citizens were registered to vote, 2 percentage points higher than in 2016.

Many voters used alternative voting methods and there was a large shift to early voting and voting by mail.

These statistics come from new data released today from the Current Population Survey's November 2020 Voting and Registration Supplement. This supplement asked noninstitutionalized civilians about their voting and registration behavior in the 2020 presidential election.

Due to the nature of survey responses, these estimates may differ from administrative reports and estimates from other data sources. However, this supplement provides a unique look at the characteristics of American voters. 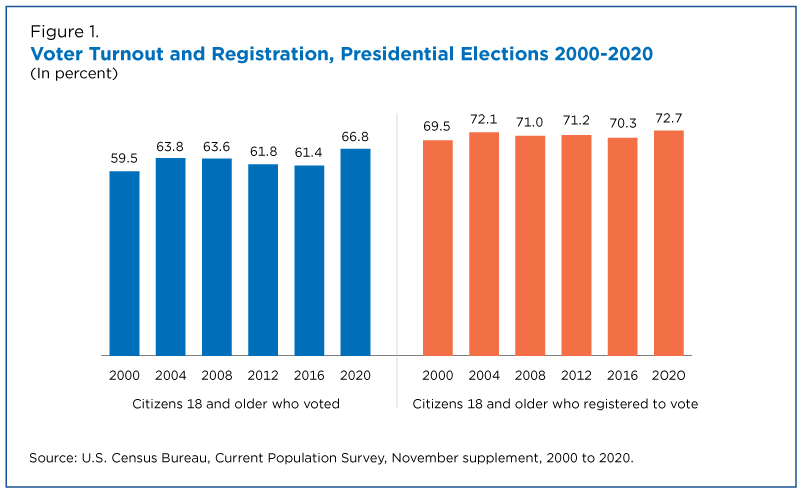 Higher Turnout Across All Race Groups

Non-Hispanic Asian registration saw a large increase as well: 64%, compared to 56% in 2016. The 2020 election also featured higher turnout rates for: 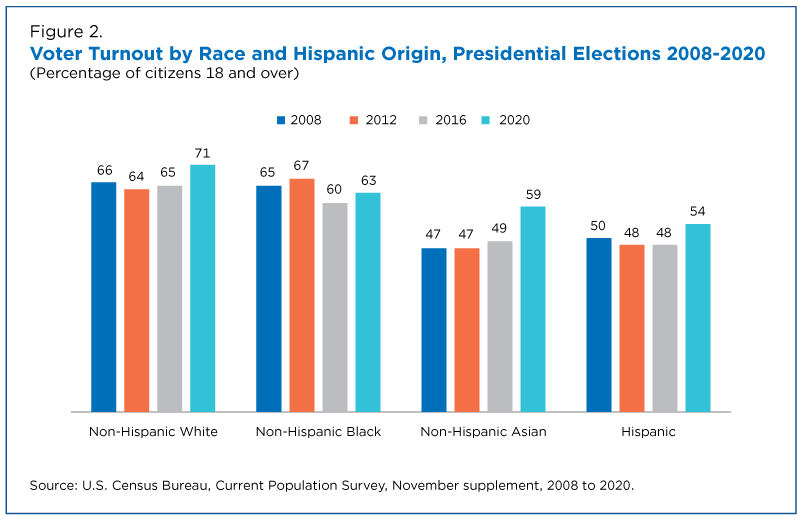 In contrast, non-Hispanic Black voter turnout in 2020 was only 3 percentage points higher than non-Hispanic Asian turnout.

Turnout by Sex and Age

Voting rates were higher in 2020 than in 2016 across all age groups, with turnout by voters ages 18-34 increasing the most between elections:

Changes in the nation’s population makeup also play a role in voter turnout.

Take for example, the non-Hispanic White alone population, a group that tends to vote at a higher rate than other groups.

Still, their voter turnout rate exceeded their share of the voting population: non-Hispanic Whites were 71% of voters but only 67% of citizens 18 and older. 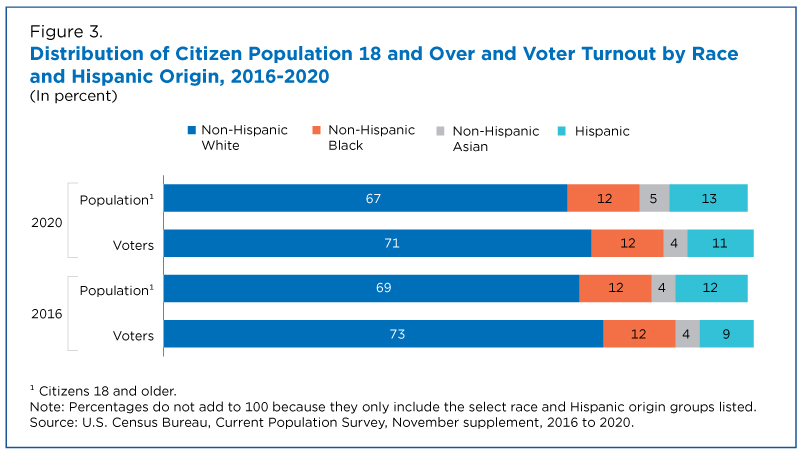 For the first time, Hispanic voters surpassed the 10% mark in a presidential election. In 2020, they made up 11% of the total turnout, close to the non-Hispanic Black share of 12%. 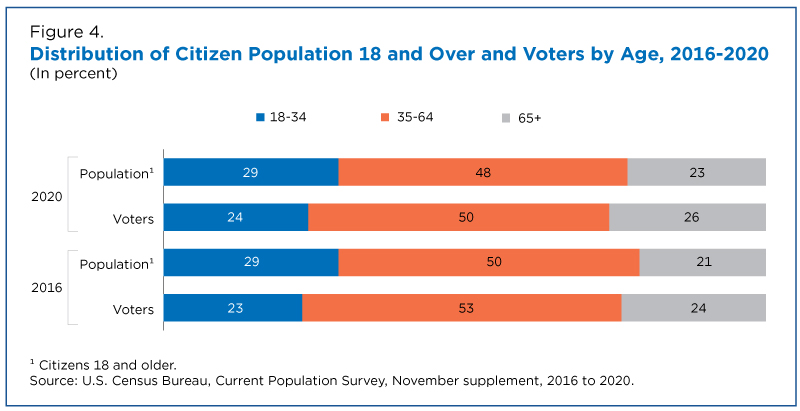 The population is diversifying and getting older but also more educated (Figure 5).

In contrast, the share of citizens 18 and older with less than a bachelor’s degree went down from 68% in 2016 to 65% in 2020. Their share of voters went from 60% to 59% during the same period but still remained the largest voting bloc. 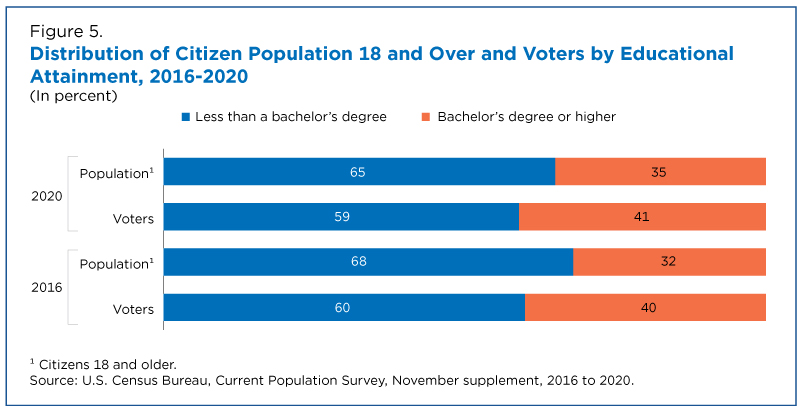 These changes to turnout and demographics are some of the unique aspects of a presidential election that, despite the COVID-19 pandemic, was ultimately a high turnout election.

Jacob Fabina is an economist in the U.S. Census Bureau’s Social, Economic, and Housing Statistics Division.

Every moment and every event of every man's life on earth plants something in his soul.