Love and Loss Among Older Adults

Editor's Note: We received the following report, by Benjamin Gurrentz and Yeris Mayol-Garcia of the U.S. Census Bureau, in an email report on April 22.

Marriage, divorce and widowhood are all significant events in the lives of anyone who has ever been married but they are especially prevalent among the older population.

Older adults have rich marital histories that reflect both partnership and loss over their lifetime, according to a new U.S. Census Bureau report entitled, “Number, Timing, and Duration of Marriages and Divorces: 2016.”

Since the 1990s, the national trend of divorce among adults 50 years or older has risen, often linked to the marital instability of the aging baby boomer generation.

The report uses estimates from the 2016 1-year American Community Survey (ACS), as well as the 2014 Survey of Income and Program Participation (SIPP) Wave 1 and Social Security Administration Supplement files.

Many older adults remained in their marriage for a long period of time. Among adults who married in the 1970s, at least half reached their 25th anniversary.

With marriage comes the risk of a marital dissolution via divorce or widowhood, which have both been prevalent among older adults.

While 34% women and 33% of men ages 20 or older who ever married had ever divorced, the percentage of adults 55 to 64 years who ever divorced is much higher: about 43% for both sexes.

Although significantly lower when compared with 55 to 64 year olds, high rates of divorce persist for those 65 to 74 years at 39%, which is still higher than for the general adult population. For adults ages 75 or older, the rate is lower at 24%.

Since the 1990s, the national trend of divorce among adults 50 years or older has risen, often linked to the marital instability of the aging baby boomer generation.

Divorce is not the only marital disruption that older adults face. They also disproportionately represent a large percentage of those who become widows or widowers in a given year.

Widowhood is particularly common among older women compared to older men due to differences in life expectancies. Women on average live longer than men.

Among those 75 years or older who had ever married, 58% of women and 28% of men had experienced the death of a spouse in their lifetime, making this stage of life particularly difficult for older adults.

The proportion of those who are currently widowed is relatively lower than for those widowed at one point because some respondents who lost a spouse eventually remarried, becoming "currently married" instead of "currently widowed."

Nonetheless, differences between the sexes persist among those 75 years or older: 54% of women and 20% of men were currently widowed at the time of interview. 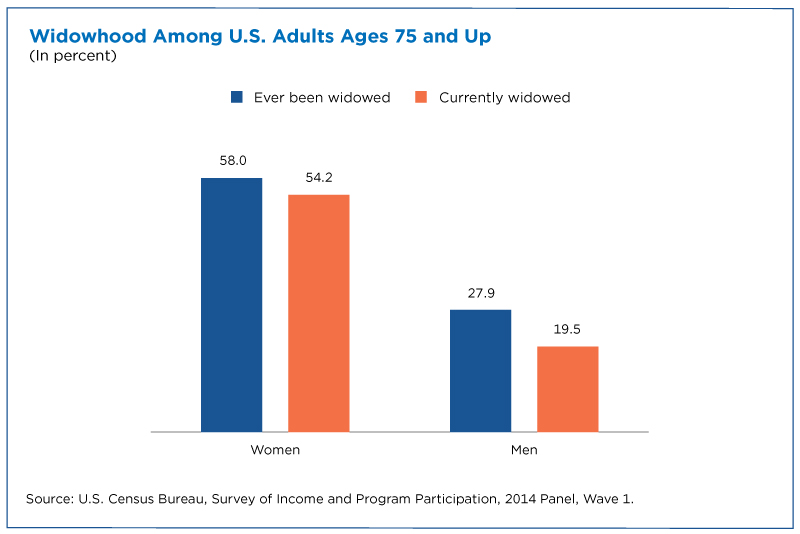 After divorce and widowhood, many older adults say “I do” again at some point in their life.

In other words, older adults have a rich marital history that reflects the diverse experiences of long commitment, loss via divorce or widowhood and new partnerships as they age.

Yeris Mayol-Garcia is a statistician demographer in the Fertility and Family Statistics Branch.

I know why I am here and my only real focused goal is to live each day to the fullest and to try and honor God and be an encouragement to others. What the future holds is firmly in God's hands, and I am very happy about that!