See also our report from the U.S. Census Bureau, "Homebodies," on the numbers and trends of couples living in the state where both were born.

We only have to look around us or among our own relatives to see that families today come in all sizes and shapes. They’ve been reconfigured by divorce, remarriage, cohabitation, adoption—often across racial and ethnic lines—and the weakening of taboos about “marrying out.” Still, for those of us in the older generation, it’s hard to let go of that Norman Rockwell/Leave it to Beaver image of the “ideal” American family consisting of father in his suit, mother in her apron, and their two perfect offspring who look just like them. As we used to say in New York, “fugedaboutit!” Here’s what’s really happening in U.S. households today, demographically speaking.

Today's Families by the Numbers 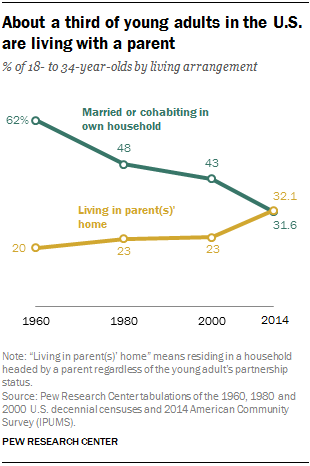 Search all articles by Barbara Greenleaf

Barbara is the author of eight books, including two of particular interest to seniors. She has given us permission to use material from her newsletter, "From the Desk of Barbara Greenleaf," to which you can subscribe on her website. • Author bio (website*) • E-mail the author (moc.faelneergarabrab@arabrab*) • Author's website (personal or primary**)

* For web-based email, you may need to copy and paste the address yourself.

** opens in a new tab or window. Close it to return here.

Lord, grant that I may always desire more than I can accomplish.