Who Uses the Social Safety Net?

While those with a high school diploma or less make up the majority of government assistance recipients, even before COVID one in seven had earned a college degree…

Editor's Note: The COVID-19 Pandemic has brought new awareness of federal "social safety net" programs. However, even before the pandemic struck, this report written by Michael D. King of the U.S. Census Bureau, using data from 2017, reveals a profile of recipients that may differ from your own picture of the safety net, especially in terms of education.

Adults without any post-secondary education made up the majority of participants in four key social safety net programs but college-educated adults account for over a third of some programs’ recipients.

These findings come from tables recently released by the U.S. Census Bureau, which provide detailed information on program participation and income transfers in 2017 from the Survey of Income and Program Participation (SIPP).

More than one in three adults receiving SNAP had attended at least some college classes and about one in seven had earned a college degree.

Adults with the lowest levels of educational attainment were the most likely to participate in assistance programs in 2017 but the education profiles of recipients varied across programs.

Those with a high school diploma or less accounted for over half of WIC participants and about three-quarters of SSI recipients.

Those with college degrees (either an associate or a bachelor’s degree) accounted for as many as one in five of some programs’ participants. They made up 19.4% of WIC recipients, for example.

More than one in three adults receiving SNAP had attended at least some college classes and about one in seven had earned a college degree. SNAP provides food assistance to families below certain income thresholds and is the largest assistance program examined here. 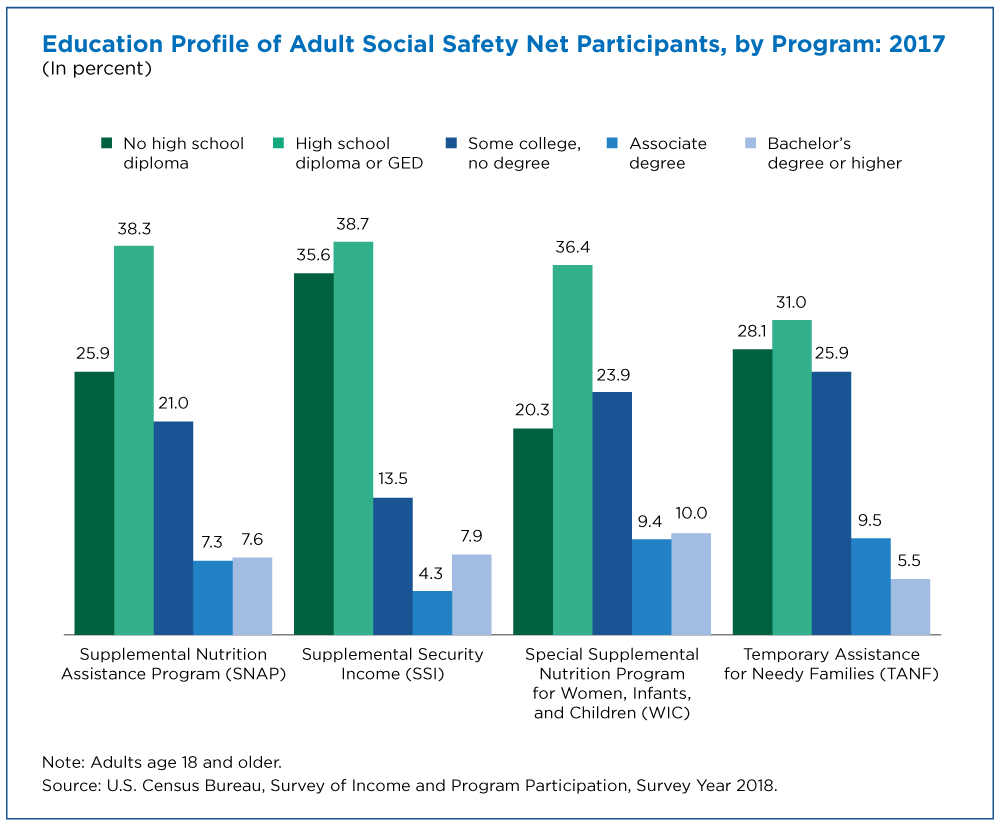 About nine million college-educated adults participated in at least one of the four government programs listed above.

Most of those who attended but had not graduated from college were not enrolled in any education program within the year, suggesting they were not actively pursuing a degree. This is consistent with many programs limiting access to benefits for many college students.

Among the college-educated recipients examined here, about four million had at least an associate degree and about two million had a bachelor’s (or higher) degree. 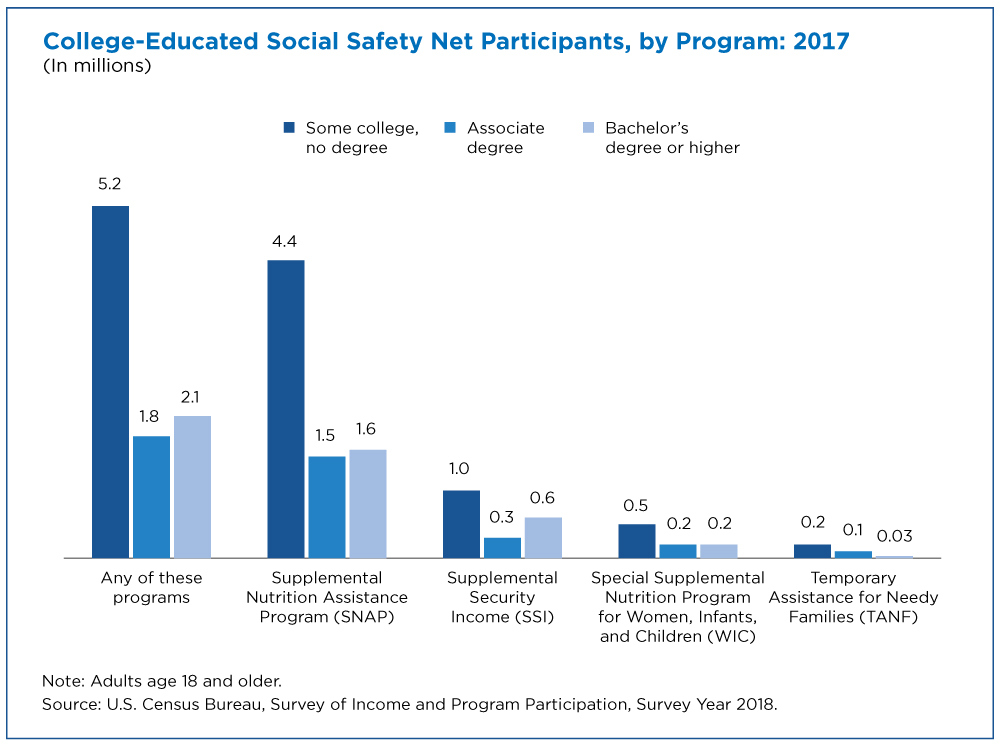 Who Are the College-Educated SNAP Recipients?

Drawing on additional SIPP data, we can compare all adults with a bachelor’s degree to those with the same degree who were also receiving SNAP in 2017.

There were also clear differences by marital status and the presence of children in the household. 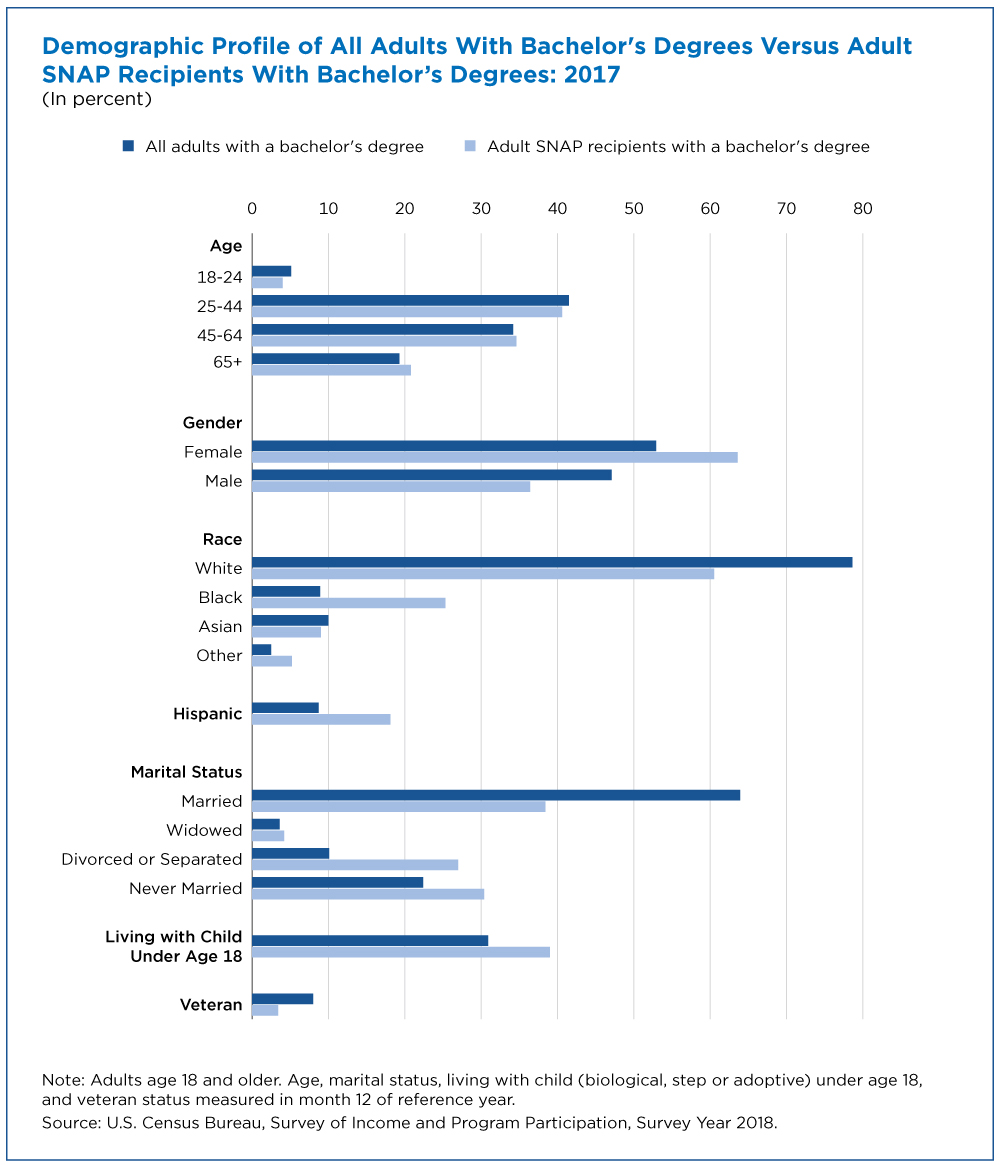 The estimates presented here are subject to sampling and nonsampling error. To learn more about the statistical guidelines used in producing these estimates, please visit the SIPP 2018 source and accuracy document.

Go to the list of most recent Finance and Legal Articles