Consumers Turn to Biking for Safe Fun and Exercise during Pandemic

Did your physical activity change much during the COVID-19 pandemic? For some the restrictions and lockdowns meant isolation and lonliness. For others, the need to maintain some semblance of normalcy and activity led to such simple things as getting outside to walk or bicycle. In fact, as this story by Earleane K. P. Dowell and Andrew W. Hait of the U.S. Census Bureau points out, the rush to bicycles triggered shortages and higher prices. Maybe you have your own story about that!.

When parts of the country were under orders to stay home and health clubs closed to help contain the spread of the coronavirus, many fitness-starved Americans turned to cycling for outdoor exercise, triggering a bike shortage.

Among the reasons cited: supply chain issues with U.S. bike manufacturers, decreased imports when factories in East Asia shut down due to the pandemic and America’s stay-at-home orders. Bicycle Retailer and Industry News reports the shortage will probably continue until mid-2022.

When many fitness centers across the United States closed temporarily, gym members quickly looked for other alternatives. Since exercising alone was a better way to reduce risk, biking solo was among the activities folks embraced amid the pandemic.

According to data from the 2017 Economic Census, 6,521 sporting goods stores sold an estimated $3.6 billion worth of bikes in the United States.

An additional $454.3 million in bike sales came from 277 Nonstore Retailers, or “online” sellers. 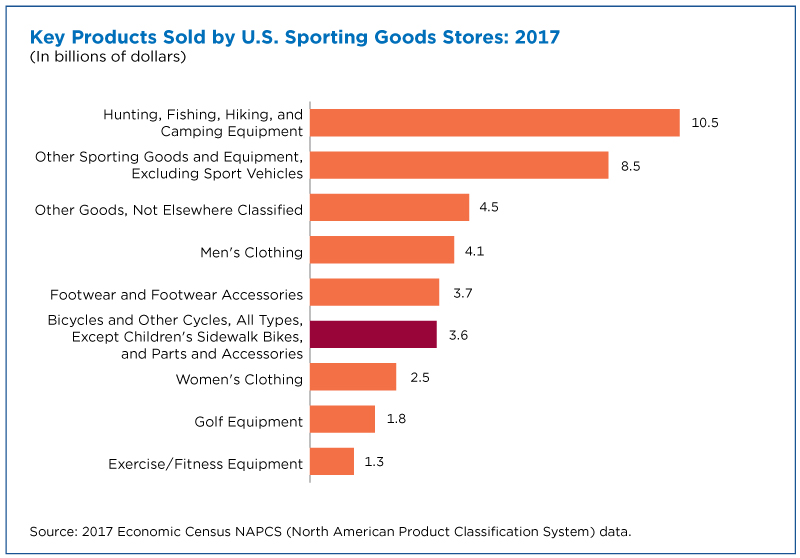 Sporting goods store sales fell in April 2020, shortly after the start of the pandemic in the United States, but rebounded and surpassed pre-pandemic levels by March 2021 (the latest data available).

Sales rebounded but the bike shortage continued through 2020 and into 2021. 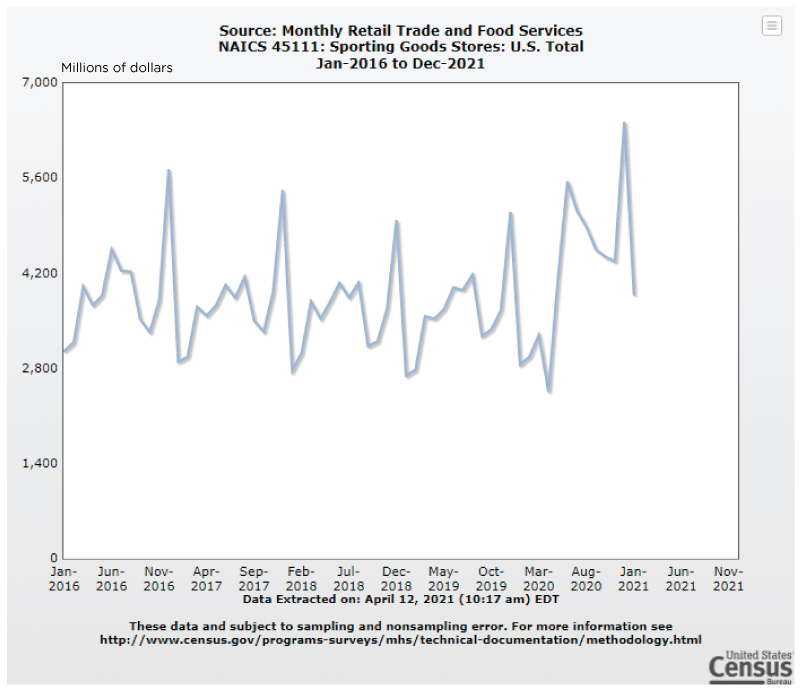 Riding a bicycle has been a popular form of exercise for decades, rising in popularity in the 1980s when mountain biking became a sport, followed by increased interest in bicycle racing in the 1990s.

When many fitness centers across the United States closed temporarily, gym members quickly looked for other alternatives. Since exercising alone was a better way to reduce risk, biking solo was among the activities folks embraced amid the pandemic.

This burst of interest in biking increased demand for lower-priced bikes and, at the same time, bike afficionados continued to buy high-end gravel, mountain, road and electric bikes that can cost thousands of dollars.

Data for 2020 are not yet available but these supply chain problems and other issues are likely to impact shipments for the year. 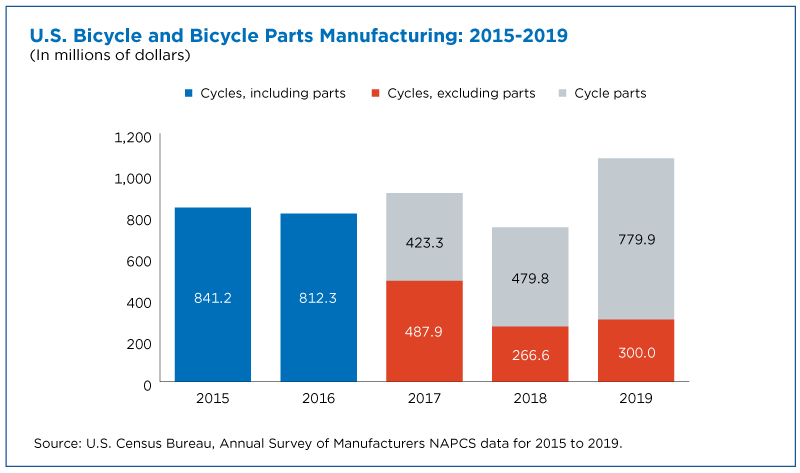 With $3.6 billion in bike sales and only $487.9 million in U.S. bike manufacturers’ shipments in 2017, it’s clear that American consumers have relied heavily on imports of bicycles — primarily from China. 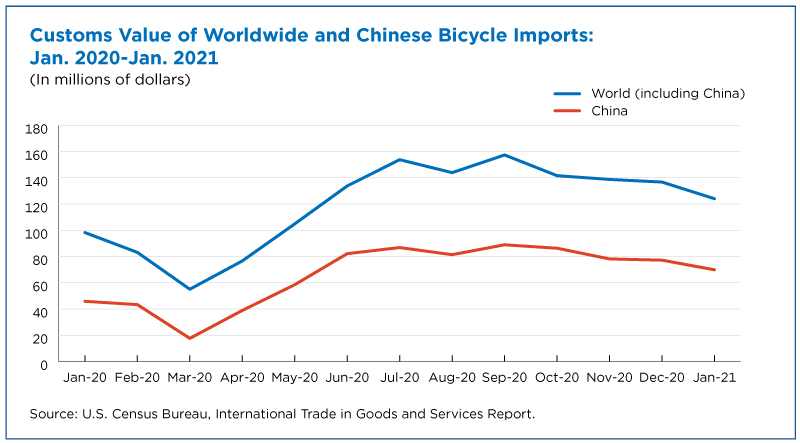 Despite manufacturing supply chain issues, U.S. businesses still exported $10.1 million in bikes in June 2020. This number decreased to $6.8 million in December 2020 but rose to $8.4 million in January 2021. 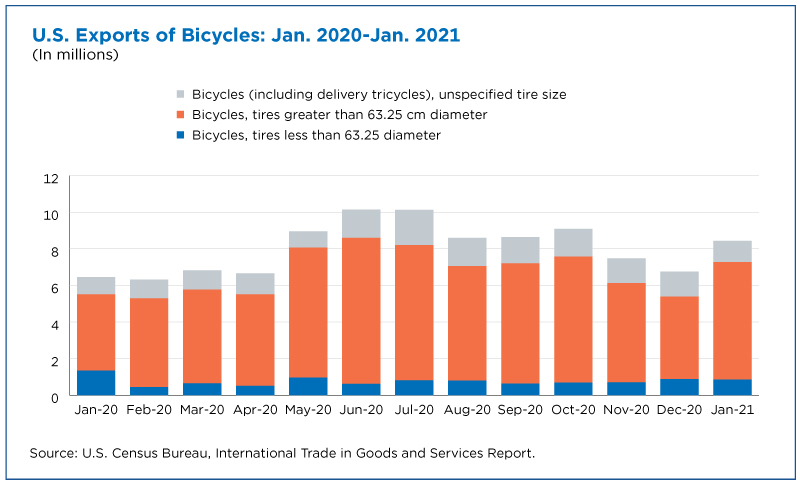 People not only ride bikes for leisure and exercise but for transportation, too.

People now are choosing bikes instead of mass transit for their safety to avoid crowded buses or metros. It also reported that cycling traffic after the pandemic began in 2020 increased by 50% from the same time the previous year in New York City and that several metro areas modified traffic patterns and opened more miles of roads to accommodate bikers and pedestrians.

Using the Census Bureau data tool OnTheMap, the “Distance/Direction” analysis of commutes shows travel patterns between residence and employment locations for workers living and working in a selected area.

The figure below focuses on the 4,177,891 workers in New York City who travel less than 10 miles to work — considered within biking distance. 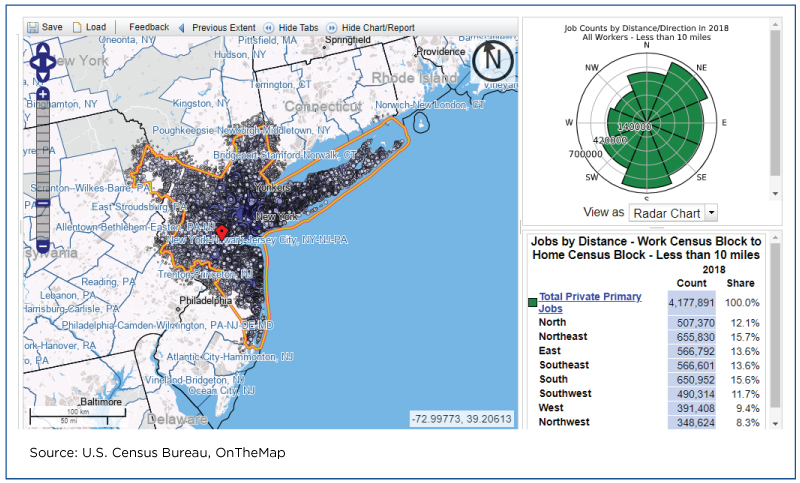 Still, even with this growth, bicycles still make up a very small portion of the mode of transportation American commuters use. The District of Columbia led the nation with 4% of their workforce biking to work but only 0.5% of workers nationwide biked to work in 2019. 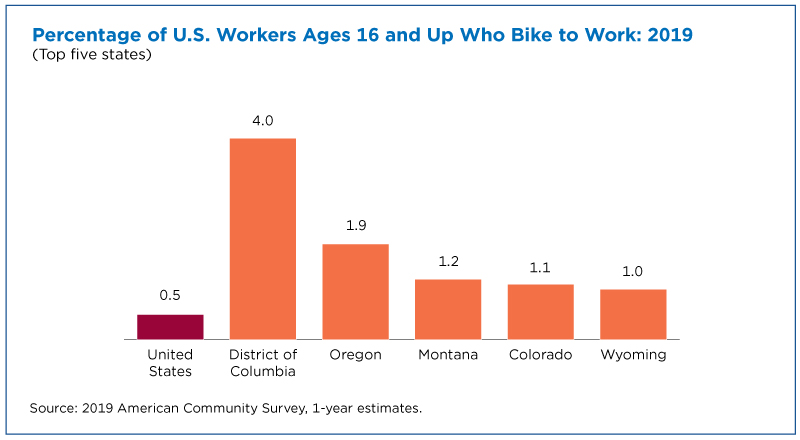 As summer approaches, bike suppliers are hopeful that manufacturers were able to catch up with demand over the slower winter months.

Go to the list of most recent Health & Wellness Articles

My sun sets to rise again.